Yesterday, while many logophiles had a lovely time schmoozing with authors and publishers at Word on the Street, I and my adventurous parents chose instead to head out on one of Heritage Toronto‘s historic walking tours. They were able to lure me away from Word on the Street because this particular tour was led by the charming and witty Maureen Jennings—author of, among other works, the Murdoch mysteries, which are set in Victorian Toronto.

The walk, Murdoch’s Toronto: Fact into Fiction, took us through Cabbagetown and Corktown and transported us to 1895. As in her books, Jennings shared with us the social relationships and economic realities of the working classes and the poor. Toronto society was moralistic and often condescending at the time: paupers were blamed for their own destitution, teachers who wore rational dress were labeled prostitutes, women doctors weren’t permitted to use the title before their names, and the poor stuck working in the house of industry weren’t allowed to speak…pretty much ever.

If you’re interested to know more about what the day-to-day life of regular Torontonians was like back then and you enjoy a good yarn, let me recommend that you give Jennings’s compelling Murdoch mysteries a try. The first title in the series is Except the Dying.

And here are a few more interesting things I learned about 1895 Toronto while on the tour:

To wrap up an informative tour on a gorgeous afternoon, we adjourned to the Dominion Pub, where we ordered pints and where Maureen Jennings was kind enough to sign my copy of Except the Dying: 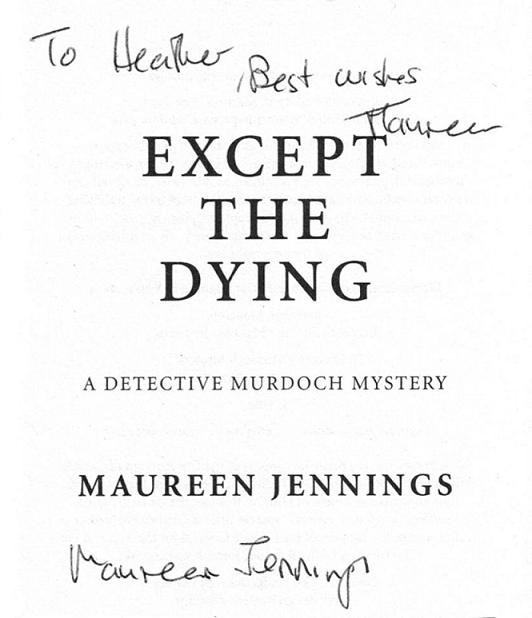